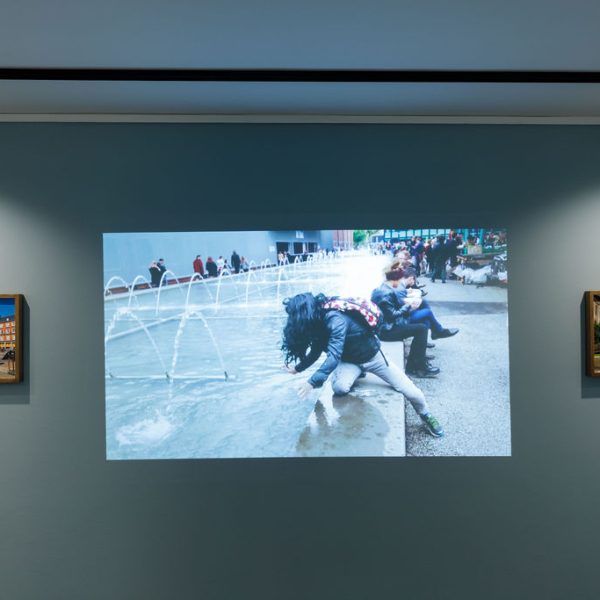 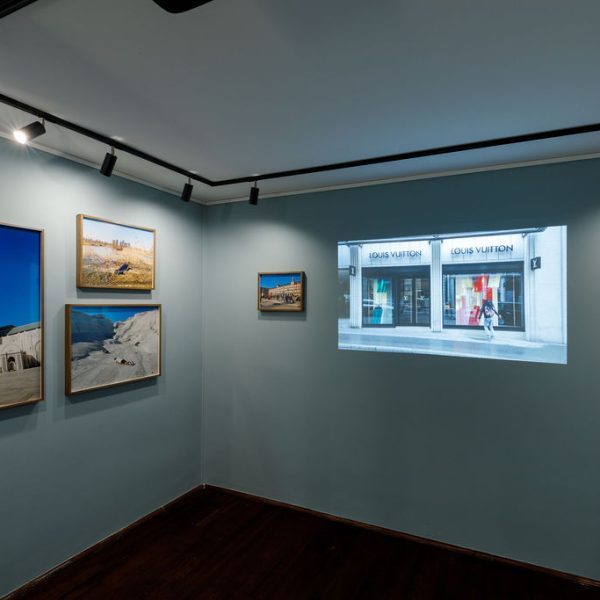 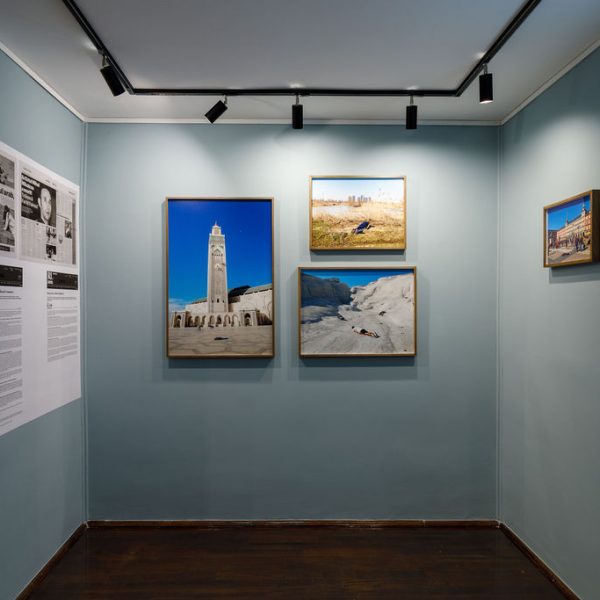 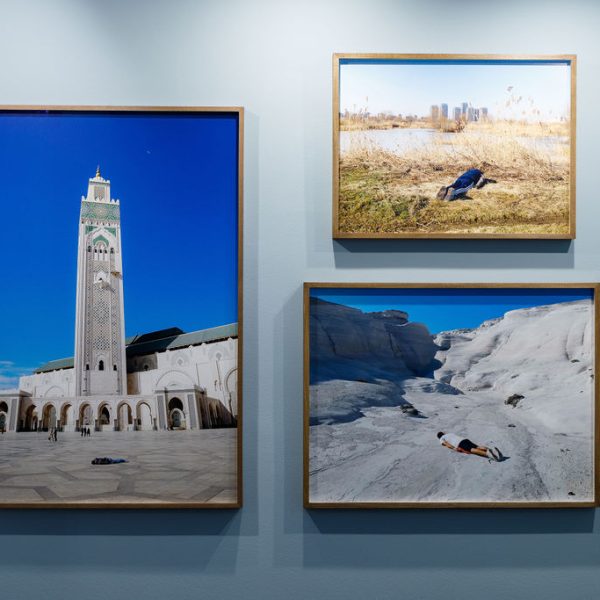 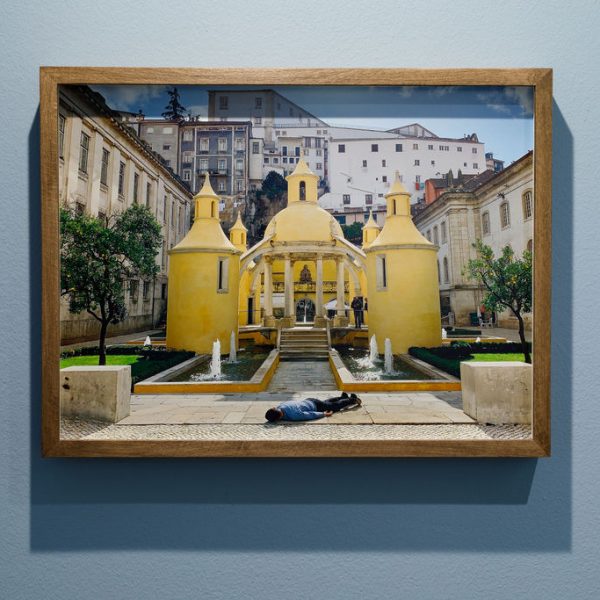 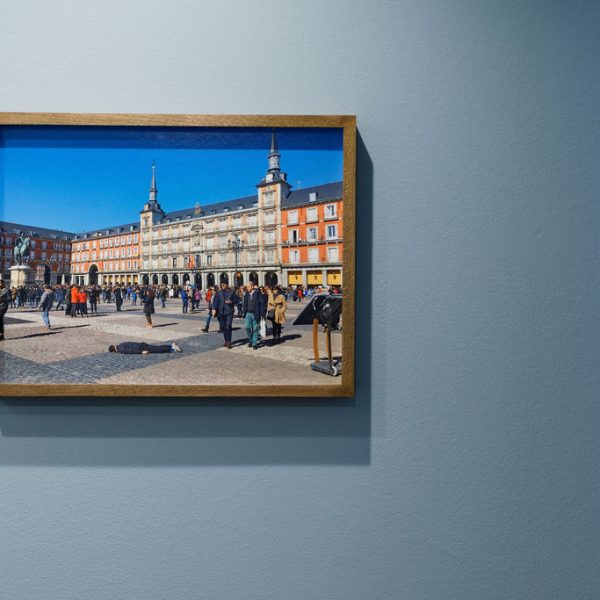 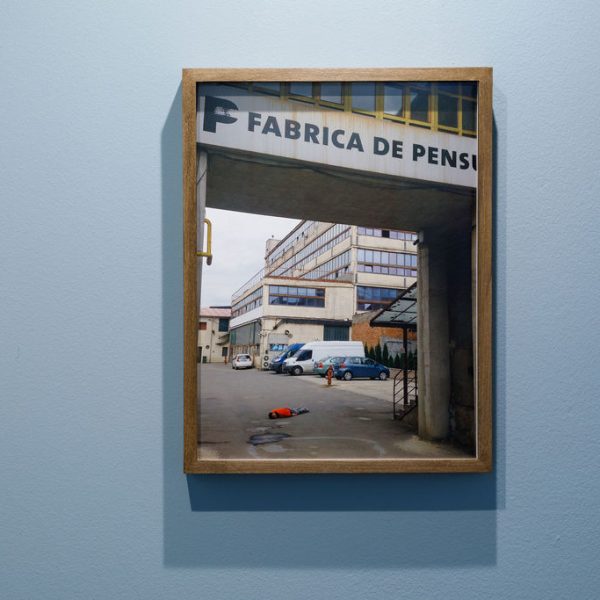 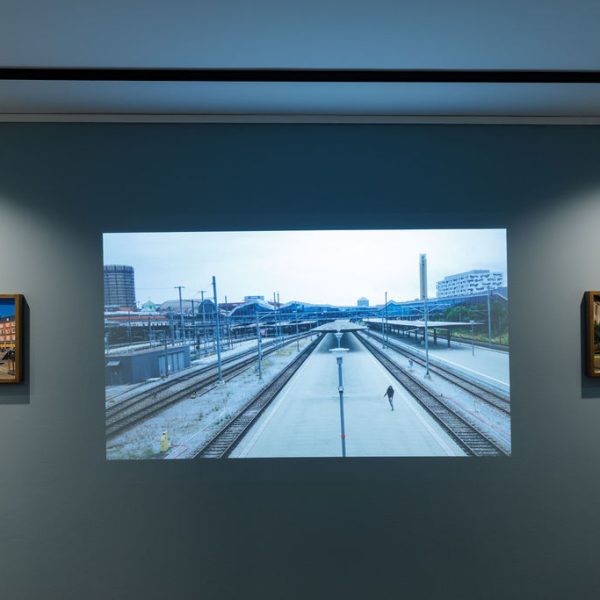 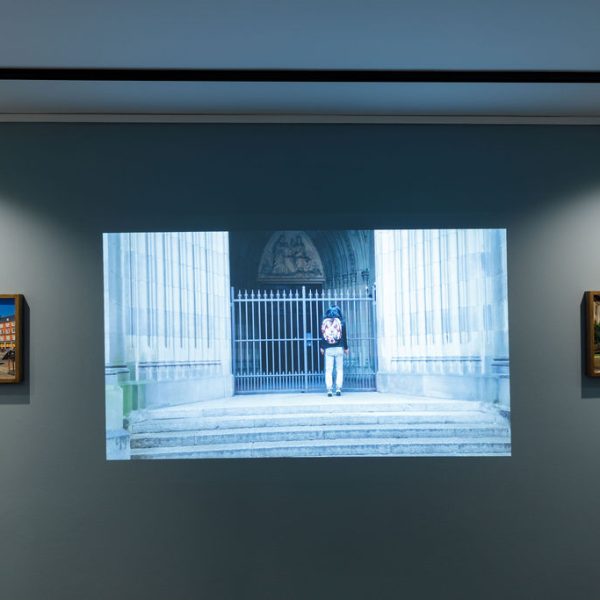 How could we imagine and unfold in an extremely concentrated space the first solo exhibition of one of the most important artists in the Romanian dance and performance scene after 1989?  What essential drops can we extract and exhibit from a vast and extremely complex practice, often designed to be presented live on stage?

After countless internal debates, measurements and permutations, a conclusion was reached: Mihai Mihalcea’s solo exhibition should focus on two distinct directions (the series “LEAP INTO THE WORK” and a set of works from the Farid Fairuz period), brought together by the fact that all the works are the result of critical performative processes that took place in public space, apart from the mediation of an artistic context offered by the museum, stage, gallery, etc.

The performative interventions included in the TRIUMF AMIRIA LOVE LETTER TO MIHAI MIHALCEA exhibition took place in urban spaces, in the mall, in the media; they are traces of sophisticated, amalgamated, direct and hyperreal negotiation processes with dominant (mainstream) principles and perspectives.

The selection of works from the “LEAP INTO THE WORK” series (started in 2004) is a photographic journey documenting the staging of a rather opaque gesture, heavily infused with vulnerability: a body lies on the pavement, in various markets and public spaces (Madrid—Plaza Mayor, Milos, Casablanca, Cluj—Paintbrush Factory, etc.), thus raising the same questions, but in very different cultural and socio-economic contexts.

The gesture is the continuation of a continuation, as the reference point is the work “Leap Into The Void After 3 Seconds” (2004) by Ciprian Mureșan, itself a reaction and an extension of the iconic piece “Leap into the Void” (1960) by Yves Klein. If Mureșan’s work is a bitter commentary on the ultra-precarious situation of the Romanian—by extension Eastern European—artist, Mihalcea is interested in the aesthetics and experiences of the body lying on the ground. His take involved a reflection on several simultaneous aspects, each acting like a facet of a dense pleated form: (*) a way to extract information about a space one is visiting for the first time, a kind of connection with the local spirit, with a vernacular non-human knowledge, (*) drawing with the body a pause line (-), the gesture becomes an act of rebellion against the neoliberal mechanisms and pressures to exploit and self-exploit the body, (*) a spontaneous test of cultural and political boundaries, but also those related to affects, empathy and care for a body that at first sight lies inert.

From the prolific artistic practice produced for a decade (2010-2020) under the Farid Fairuz moniker, the selection for the exhibition includes three crucial moments:

(1) documentation of performances that took the shape of extensive media interviews (Adevărul, România Liberă / 2010) announcing the emergence of Farid Fairuz as a fierce protester attacking issues such as patriarchy, racism, religious bigotry, sexism and the many failures of the art system. At the same time, these performances in mass-media are the diversion that marked the beginning of a complex and composite process of fictionalizing his own biography. In a state of daily siege by the absurd in local media, in the Romanian (but not only) cultural and political scene this alter ego proved to be a liberating solution for the artist who also held the position of director of the main dance institution (CNDB). Queering was a major artistic strategy to unleash critical attitudes under the name of Farid Fairuz in forms that ranged from playful, extremely sharp, and gloomy.

(2) the video “AFIFARID” (2011) marks the beginning of a series of guerrilla performances (short, spontaneous and intense) in various public spaces. Made in the largest shopping complex in Bucharest, “AFIFARID”, a work disguised with a lot of humor, is an oblique, ruthless attack on wild consumerism and heteronormativity. Acting from the inside, the appearance of Farid Fairuz as a carnival mascot quickly turns into an unpredictable act of shamanism, absolutely necessary to avoid the total emptiness of living our life in the mall.

(3) One of the many fascinating aspects of the practice under the name of Farid Fairuz is the one related to the subtle mutations sometimes intuitive, sometimes programmatic that happened with each performance, intervention, screening. In the video performance “Lament (Not Mecca, Not Rome)” (2016), the act of rebellion no longer focuses on the realities in Romania because, in a moment of rupture, the artist decides to test whether he can set in motion the critical discourse of the character Farid Fairuz, having as its subject a different context far from the local one that made this character so necessary.

The video performance by Farid Fairuz did not happen in Mecca, neither in Rome, as one could expect knowing his practice, but in Basel during ART BASEL, the short time span when the gates of the art business heaven open. The spontaneous gestures were ignited by the rather oppressive feelings conveyed by the strict neoliberal design of the city.

What could be the disruptive potential of the body in an art capital obsessed with the future of endless financial growth and the rigors of such scenario?

The sequences of the performance are documenting the clashes between his body and the highly structured definitions of behavior in public space, in a context of prevalent thinking in luxury and financial investment terms, even when it comes to art. The irreverent and humorous gesture of bumping and squashing his body into the windows, an alarming direction that was not stipulated by the neoliberal design, becomes harm and benefit, attack and self-organized protection, poison and remedy.

The particular type of walking through the city—a clear reference to certain movements in Pina Bausch’s Café Müller (1978), dearest to Fairuz—turns into something of an unapproved script.

As if channeling not only his thoughts and feelings but also those of others fighting the brackets on “public” in the meaning of public space, his body (and art) feels like the voice of many.

As a P.S. of the exhibition, a recent interview published by Glamor magazine (2021) brings clarifications about Farid Fairuz (accurately described by its creator Mihai Mihalcea as a politically incorrect, turbulent, corrosive character), about layers and reformulations, but also about the moment when this character has reached his potential and the self-reflexive process that made it necessary to send him into a kind of fictional exile (as fictional as his appearance)

As two concentric circles in an never-ending organic relationship of reformulation, both the works from the series “LEAP INTO THE WORK” and those from the Farid Fairuz period present the artist not only as a skilled provocateur and negotiator in a tour de force of mental, physically and emotionally strength of the body, but also as a shaman who for over two decades did a major groundwork in disenchanting us from the seductive grip of capitalism, from the manipulative charms coming from political spheres and media, from the conspiracy of dominant and oppressive mentalities.

The exhibition is part of the TRIUMF AMIRIA: MUSEUM WORKINGS cluster.

Mihai Mihalcea is an artist and choreographer based in Bucharest. He co-founded the group“Marginalii” (The Marginals), which was the first group of independent dancers post-1989 and he initiated and contributed to major initiatives and institutions such as Multi Art Dance Center (MAD), The National Dance Center in Bucharest (CNDB), subRahova space, Căminul Cultural which led to the international recognition of Romanian contemporary dance.

Between 2005-2013 he worked as Director of the National Dance Center in Bucharest, an institution he co-founded, which became one of the most formative structures for several generations of local artists and choreographers. He was nominated for the “Paris – Europe 2006” prize by Maison d’Europe et d’Orient from Paris for the projects he conducted at CNDB.

In 2010 he assumed a new, fictive artistic identity, namely Farid Fairuz, under which he continued his work until 2019 and made choreographic works and performances, both live and for camera. These have been presented both in the context of visual arts and of contemporary dance in institutions such as Kunsthalle Gent (BE), Black Box Theater Oslo (NO), The Contemporary Art Gallery of Buckenthal Museum Sibiu (RO), Rencontres Choreographiques de Seine-Saint-Denis (FR), HAU Berlin (DE), The Paintbrush Factory Cluj (RO), The National Dance Center, Bucharest (RO), Akademie Der Künste Berlin (DE), Kunsthalle Bega, Timisoara (RO), etc

The entire artistic production he made under Farid Fairuz moniker was recently acquired by MNAC – The Museum of Contemporary Art Bucharest (RO).