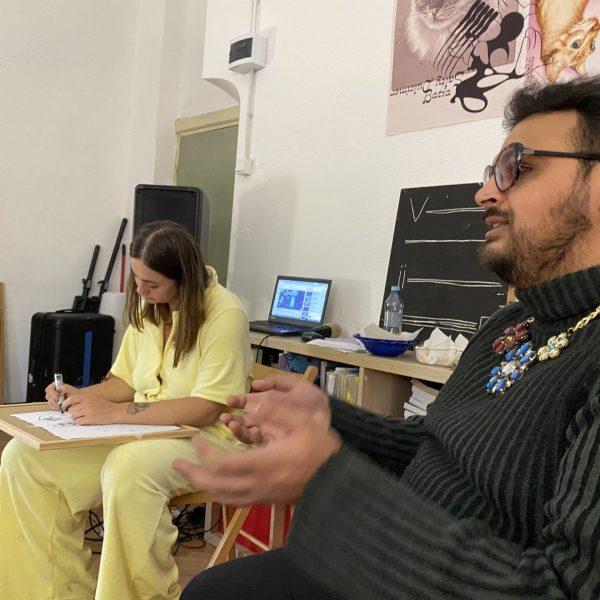 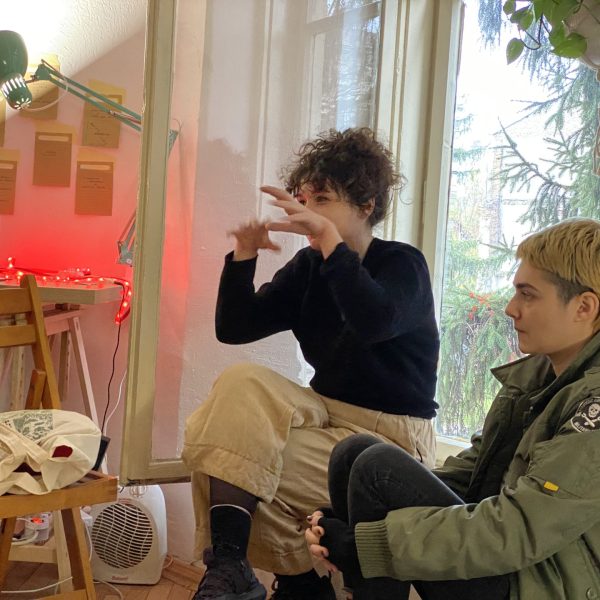 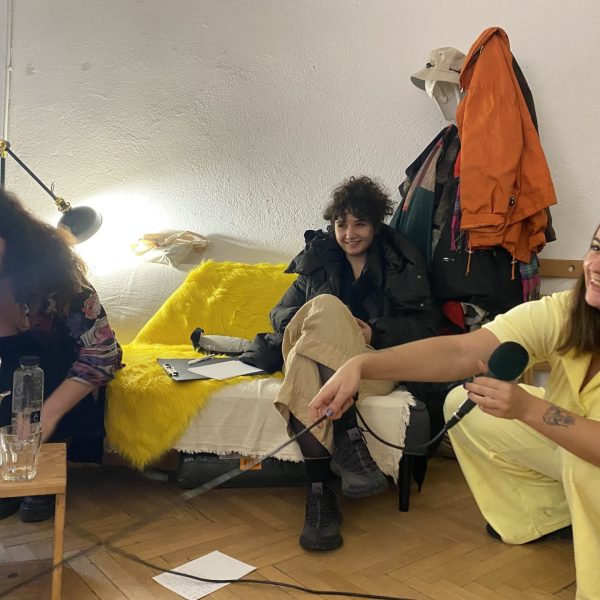 TRIUMF AMIRIA. The Museum of Queer Culture [?], together with artists Jasmina Al-Qaisi and Raj Alexandru Udrea, invites you to take part in the extension of the audio work “The Language of Question Marks”, part of the exhibition ” You FEEL ~ AND DRIFT ~ AND SING” (1- 245), curated by Kilobase Bucharest aka Dragoș Olea and Sandra Demetrescu, soon at Combinatul Fondului Plastic (Băiculești Street 29, Bucharest).

On Tuesday, November 16th, from 1-4pm, we invite you to MATKA @Atelierele Malmaison for the workshop “in the language of question marks”, where we want to create altogether an intimate, non-hierarchical, playful, affirmative space where we can express ourselves together by amplifying our voices.

In the language of question marks we want to talk, sing, and speak into microphones about The Language of Question Marks, a language disassembly tool created by Jasmina and Raj. We propose to develop together a workshop about nuances of all kinds by following affirmative words, invented, questioned or re-imagined. The aim of this meeting is to share the experience of being together and expressing ourselves freely in a space where we enter when we feel very comfortable.

“The language of question marks” is a sound installation, a constantly changing composition made up of answers to the question “How do you say queer in your language?”, conceived and proposed by Jasmina Al-Qaisi as a dedication to the Triumf Amiria initiative and its manifesto, available to read and save+type on www.triumfamiria.ro and performed and interpreted with Raj-Alexandru Udrea.
Entries are open to anyone until 15 November 2021.

Jasmina Al-Qaisi is a writer for voice and paper. Her works or audio actions can be heard on mostly free or temporary international radios and she is a member of the sound interested artists group Research and Waves, she writes, exhibits and organises around the world and for various media.
https://jasminescu.com/jasminescu

Raj Alexandru Udrea is an actor, performer, drag-queen and trainer. Raj Alexandru produces several theatre performances, works in the independent Romanian theatre scene and works alongside NGOs, often in the role of mentor or trainer. He has participated in several workshops and training sessions on topics such as racism, homophobia, anti-discrimination, inclusion of minorities in society, drama, and many others.

The contributions of the work have been gathered around the Triumf Amiria participants since April 2021 and during the „in the language of question marks” workshop in November 2021.
More about the artwork here: https://jasminescu.com/a-language-of-question-marks