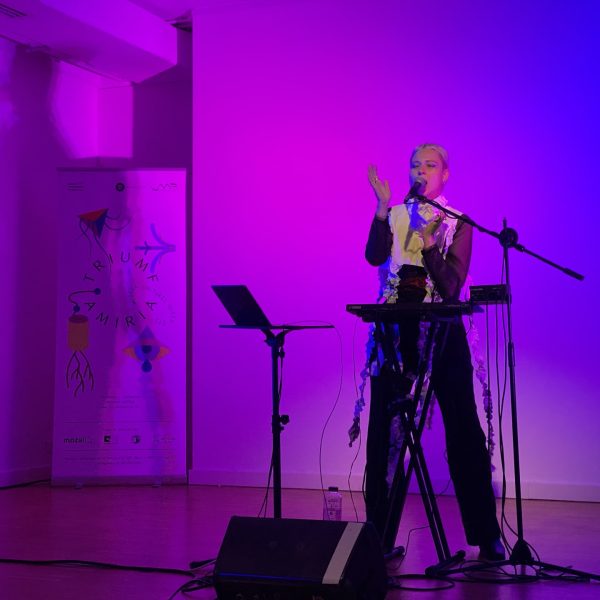 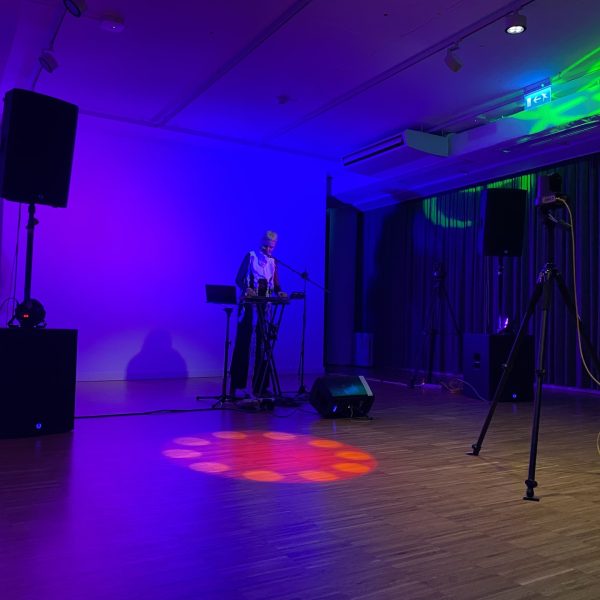 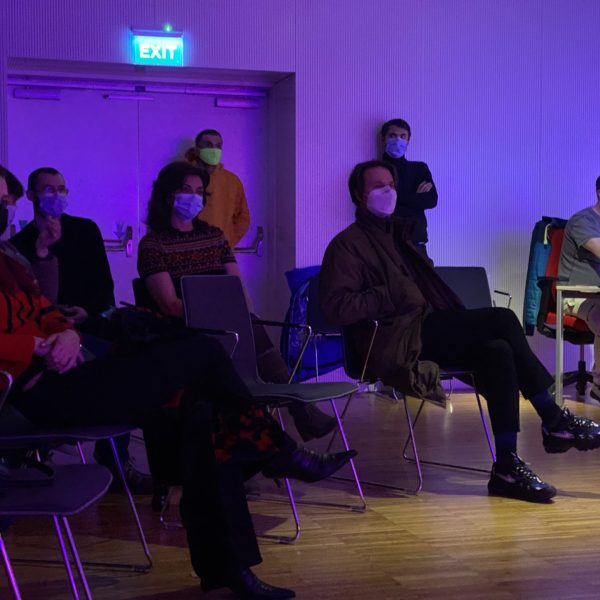 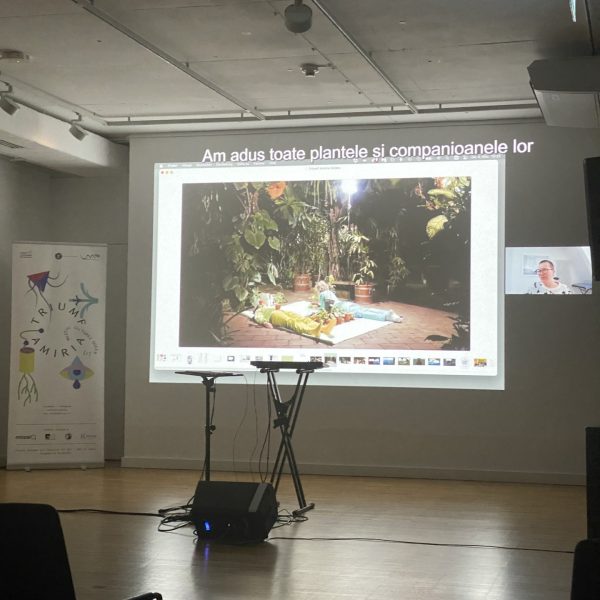 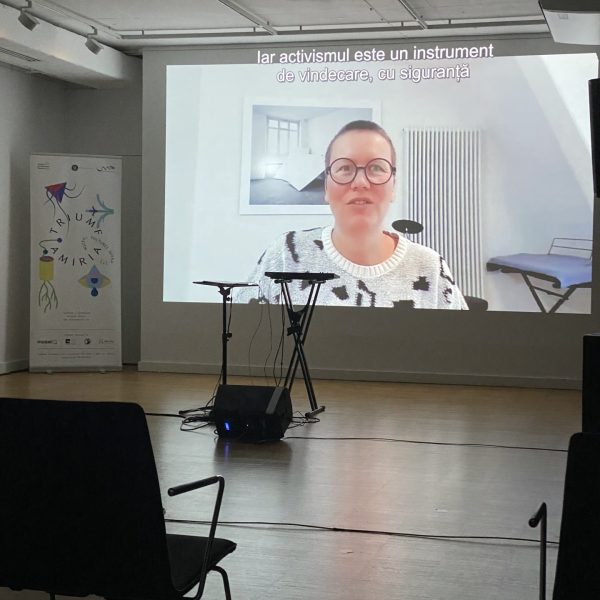 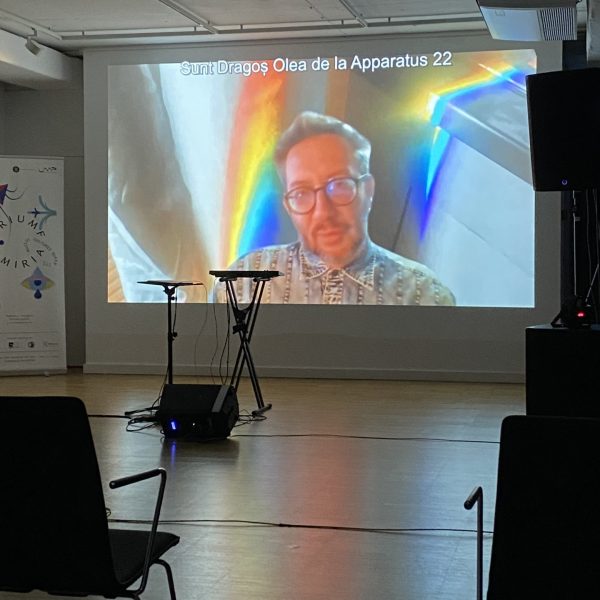 TRIUMF AMIRIA. The Museum of Queer Culture [?] invites you to the premiere screening of the discussion between artist and curator Vera Hofmann and Dragoș Olea about queer artistic, curatorial and institutional practices and other queering strategies, followed by a live performance by Sofia Zadar. The event is part of the educational program proposed by Mihaela Cîrjan within the exhibition ” You Feel ~ and Drift ~ and Sing”, a non-exhaustive and non-linear result of the research of queer Ro cultural production in the field of visual arts in the last 20 years, curated by the collective Kilobase Bucharest ~ Dragoș Olea and Sandra Demetrescu.

Vera Hofmann works as an artist, curator and consultant based in Berlin at the intersection of contemporary art practises and design, self-organisation and organisational restructuring, healing and political activism. Vera has been developing long-term research and artistic practice on ecological, economic and social crises. They are now investigating how practices and sensuous knowledges around intersectional feminisms, non-duality, embodied social justice, queering and commoning can be brought together for sustainable change and shifting paradigms. With a BA in business administration, a BA in photo design (Lette Verein, Berlin) and an MA in Fine Arts (Sandberg Institute / Gerrit Rietveld Akademie, Amsterdam), Vera‘s work has been exhibited internationally at cultural institutions including De Appel Arts Centre (Amsterdam), Benaki Museum (Athens), Haus der Kulturen der Welt (Berlin), Palais de Tokyo (Paris), and Pori Art Museum (Finland). From 2016 to 2020 they were on the Schwules Museum Berlin executive board of directors and a member of the curatorial team. In 2018, they co-curated and led the Year of the Women* project: a year-long queer-feminist intervention to address the structural, economic and representational imbalances within the world’s largest museum for LGBTIQA+ history, art and culture. In 2021 they are co-publishing the book „Radicalizing Care – Feminist and Queer Activism in Curating“ (Sternberg Press) and coauthored „kuratieren #7“ (Arthur Boskamp-Stiftung). Larger bodies of work include founding the artist duo BENTEN CLAY: “a global corporation”, and making work on nuclear waste disposal, global power dynamics and resource distribution (2011–2016), as well the Contemporary Cure Compendium on queering health practises, healing and care (2014–2016).
https://www.verahofmann.de/

Sofia Zadar emerged on the Bucharest scene in 2018 as a solo bedroom pop, spoken word and performance art project. Aesthetically, the project is in constant flux, currently blending synthwave, post-punk and dreampop influences with chromatic and atmospheric synths that underpin introspective lyricism and ethereal vocal compositions. Thematically, Sofia Zadar’s music explores the spaces between the emotional and the social, all from a queer and feminist perspective. In 2020 Sofia Zadar released her first EP, Sunday Blue, and on 22 August 2021 she released her second, Lyra, an ecofeminist meditation on communities and collective transformation. The EP was produced at Cirkular studio in Cluj and has been characterized, among other things, as “a handful of tracks that excel lyrically and sonically alike, rising above entire albums of unassuming aesthetics” (Cezar Popa, Echinox Magazine).
https://www.youtube.com/channel/UCyfsSrTbrjZm-i4myukQFqA

The talk was recorded in November 2021 as part of the project “How should we talk about Queer Culture?”, produced by MATKA Association, curator: Mihaela Cîrjan. The talk is subtitled in Romanian.

The event is open to 20 people, green certificate holders, by registering at Pavilion32-bucuresti@goethe.de.

Event in partnership with Goethe-Institut Bucharest.